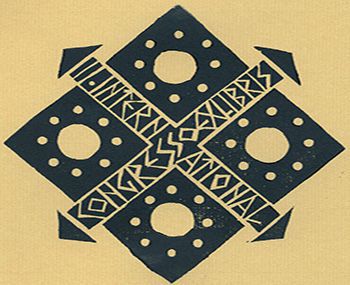 As often happens with words (a bit 'strange) must refer to the Latin to understand the meaning of the term "Ex Libris" which translates "from the books of". After this brief semantic search we enter, in small steps, in its history and in the unbreakable bond between the author of this mark that is affixed within the book and bibliophile (the book lover) who commissioned this insert for to indicate membership, almost to prevent theft. In doing so, however, the enriched even more and those who stole took a hit in two important things. So much so that, if the intent was to a kind of "brand" of property to prevent the spoliation, the effect could be otherwise, because the book became even more valuable and might be better to continue to use the old chain that bound the book to the parapets with which the monks were trying to prevent the theft. Moreover, even deterrence with curses not always sortie the 'desired effect and those who wanted the book did not stop in front of these "alarms". 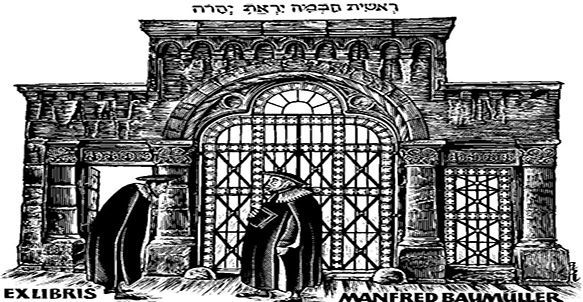 We said that the sign of the property from a distance and even find something similar, in the ancient Egyptian, the work of Amenhotep III who, during his reign (1394-1356 BC), engraved the chest, with the precious papyrus, with a seal properties of ceramic glazed in blue. Hereafter, the Assyrian king Sardanapaolo, in the sixth century BC, on Nineveh, for tablets collected, affixed, in cuneiform characters, the written "Palace of Ashurbanipal, King of armies, the king of the land of Assyria. Probably more emblematic cases there have been in China and India, regardless of the difficulty of writing, but to us, it is not known with certainty. Obviously, even the ancient Romans have had their exlibris, but they sure were recovered "tiles" in Roman archaeological sites in Sicily, on which was affixed a trademark. That is, the mark of possession, also affixed on the books, has several origins and is to report the pride of that property or, simply, means: "this is mine" and is affixed on everything. All sooner or later had the need to disclose the identification of the property and separate it from the others. Obviously, apart from that Proudhon argued that "property is theft", not in all parts of the globe this concept was so exasperated as in the West.
You will say, now, that there are signs of property engravings on the tiles, but is it true? And yet, how can you call, otherwise, the imprint of a hand was found on cave paintings?
Man since he went out from Eden has almost always felt the need to mark what was his: a fence to delimit his property and so forth. We come to modern times, when the exlibris becomes what it made become the time in a continuum that links the past and the future: the invention of the printing of Johann (or Johannes) Gutenberg Gänsfleisch called Gutenberg. To Him we should the innovation that make lose to the book its connotation of unique text and its characters with a print shows the first modern exlibris which is precisely a woodcut (XV sec.).  As with all things (almost all) in the history of exlibris there have been ups and downs.

The spread of printing technique (also coincides with the economic disaster of Gutenberg), the exlibris spreads and in the sixteenth century is spreaded in Europe; in 1600 it reaches its maximum splendor with the development of the literary academies and the dissemination of books, while the following century saw an involution because exlibris serve almost only to adorn the various family crests and therefore are a bit 'monotonous and without fantasy. With the French Revolution and the disappearance of the nobility become graphic art, without limits apparent to acquire, again, with the splendor a liberty period. We come to the present day, without, however, to expect to have provided an exhaustive view of its history and the ease of its spread. It should not be, in fact, forgotten that in periods of the Iron Curtain, an exlibris could easily switch from one border to the other, while other forms of art suffered far greater obstacles. It sounds trite, but this package was a cultural link between countries of the block (Lithuania and others) and the West fostering contact and the dissemination of art. The technique is developed and the "package" flourishes (enough?) as free technique that no longer has a strong bond (single) with the book and bibliophile. We do not see anything bad, but we should encourage the natural link with the book because so the exlibris grows, develops and continues to live.  For this reason, in times of innovation and globalization, we are not opposed to different techniques, less bridled than before (even of partial cloning revealed!).Said  this, we don't accept photocopies between the art forms, but, perhaps, the artistic results of the computer, under certain conditions, may be received. Let's go back to the art, when it is not? And, yet, we can talk about poor art and minore art? For us, art is art and there are (should not exist) these distinctions. But when, the craftsman becomes an artist? Maybe when plasma "the piece" (have to be unique?) In its best form and it does make meet with his "user"? Here the speech becomes difficult and  we don't deduce unique ideas not even from the German philosopher Alexander Gottlieb Baumgarten and ... to this time, we stop here.

Tommaso Lo Russo posted a comment in Enchanted Woods Contest 2017 Edition: The Jungle Book and The Disney World
Hi Mari, For this we will inform our community by newsletter, Facebook page and here. Regards....
Monday, 29 May 2017 16:53